Vegetation is getting sparser as we move south deeper into Namibia. We are breaking our trip to the Etosha Pan with an overnight stay at a lodge on the Okavango River at the Namibian/Angola border. There is a thunderstorm currently raging over Angola. Seems suitable based on the violent past of that country. I am getting a little tired of the dusty towns that follow the highway south and looking forward to getting into the Etosha Pan and the Namib desert.

The lodge we are at is a charming mixture of the Hobbit and The Wild Wild West. I keep expecting Bilbo Baggins to materialize wearing a cowboy hat….. German lady bought it in the late 80’s- hard times during the Angolan civil war – 30 months without any guests. They stayed at the lodge to prevent it from being destroyed and looted. Hard times again now with the economic troubles in Europe where most of their guests come from. 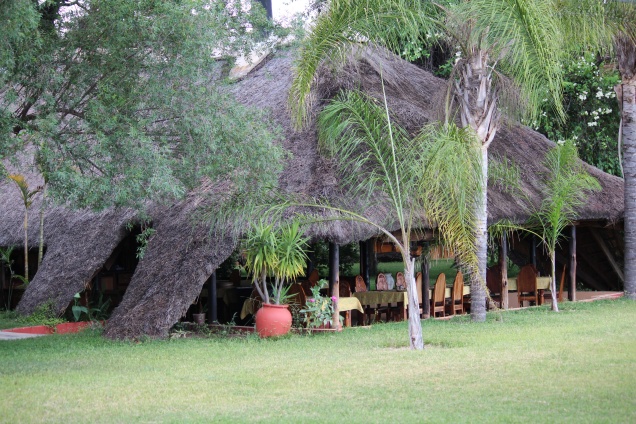 We just heard a lot of yelling from the Angola side of the river followed by a gunshot – all is quiet now so guess the problem is resolved.

Our dinner began with a traditional welcome dance, drumming and songs performed by the local villagers. Their skirts were made from sections of bamboo ending with bottle tops which made the rattling noise that accompanied the drumming. Dinner was an open air buffet watching the sunset and enjoying the excellent kudu curry.