As we drove deeper into Damaraland the land turned to a mountainous desert. The geology is amazing, mountains, kopjes, rocks showing evidence of all types of marine environments in the past. We passed stratified rock beds of granite and sandstone – including some of the oldest rocks on earth. The colours are stunning – the deep reds of oxidizing environments together with the darker hues of more anoxic marine environments. 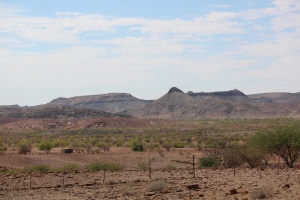 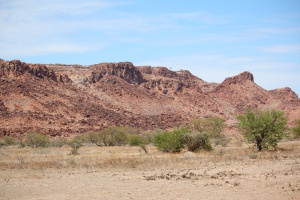 Twylefelfontein is a huge sandstone amphitheatre in the desert that surrounds a spring hidden in the sandstone mountain face. The name means doubtful spring. The San Bushmen knew of the spot and spent a lot of time here carving pictures of animals in the sandstone, some 2000-6000 years ago. They used granite to do this. The etchings are lovely and depict hunting and magical scenes from the bushmen culture. It is thought that Shamans carved some of the pictures to ensure passage into the afterlife. Shamans in the Bushman culture were also thought to be able to pass through rock and were considered to be shape shifters. Some of the animals depicted are half human and half animal indicating a shaman changing into an animal. Also among the etchings are probably the first depictions of movement in animals. The heat was intense by the time we left and traveled back to Khoraxis for the evening. 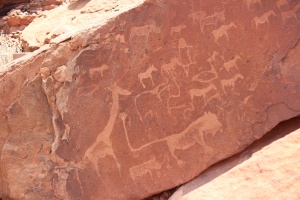 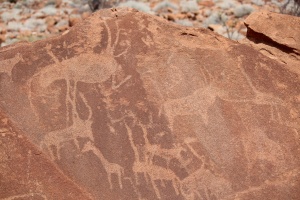