What an incredible day! We got picked up early and headed to the sacred Valley. It is an ecologically varied valley with a number of microclimates present. It is also stunningly beautiful. Our first stop was Chinchero View Point were we overlooked a number of snow covered mountain peaks surrounding the valley.

Dropping down into Chinchero we took some time to visit a family of spinners and weavers who showed us how they spin and dye wool from alpacas with vegetable and insect dyes.

Taking the back roads along the way was wonderful – the farming and natural beauty was all around us and not a car in sight.

Our next stop was the archaeological site of Moray which is thought to be from the 1400’s. The site wasn’t discovered until 1932 when a group flew over it in an air plane. It is thought that several families lived there. The terraced bowls were built in natural depressions to create micro-climates for vegetables and other crops. Experiments by scientists in Lima have shown that potatoes grown at the bottom of the bowls were it is warmer, grow much faster and produce much more than those grown up top.

Maras – a salt producing area was our next stop. Springs come through the mountain and pick up salt from mineral deposits deep within the earth. The salt springs are captured in several hundred shallow pools were salt is produced by evaporation. The process takes about a week until the salt can be collected. 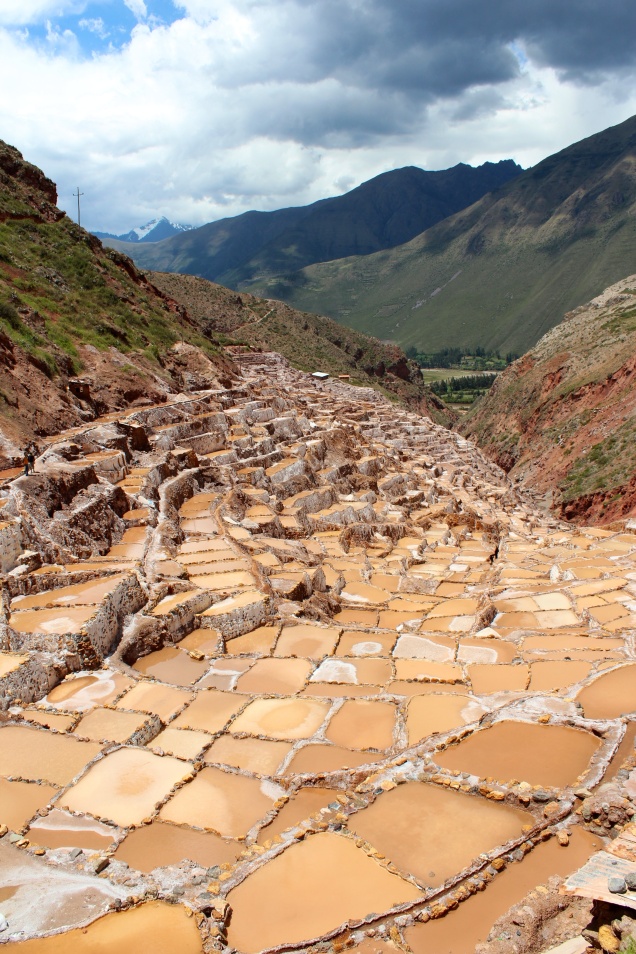 Uruvamva was our stop for another excellent Peruvian lunch lunch – this is considered the gateway to the sacred Valley.

The Archeological park of Ollantay Tambo was awe inspiring. A series of terraces and walls culminated in an Inca temple of the sun. This was a religious site with some priests living in the buildings.