Today was a wonderful day in Tierra del Fuego national Park. Human habitation goes back here almost 10,000 years. The Yamana people lived along the coast living on sea mammals and fish. We also had the opportunity to taste some of the mushrooms and other native plants that they ate during our trek today. 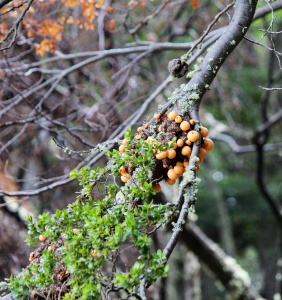 The scenery along the route of our trek was incredible as we walked through forests and along beaches bordering the Beagle Channel. A lot of similarities between the PNW coastal forests and a lot of differences. Same windblown trees – no conifers though – three types of Beech trees – 2 deciduous and one evergreen, lots of plants in miniature. Climate here is pretty uniform. 10 degrees C average in summer, 0 degrees C average in the winter.

At the end of the day we boarded a raft that floated us down the river and into the ocean where we disembarked at the end of Hwy #3 – the Pan American Hwy that starts in Alaska. A magical day 🙂