At it’s extremes the Drake passage is referred to as the Drake Shake or the Drake Lake. With a fresh 15-30 knot wind and and the rolling of the ship in 15 foot swells we are some where in between. There are 85 of us on this ship and we look like cast members from The Living Dead as we struggle to find our sea legs. Thank heavens for Gravol – a lot of people are sick at the moment. If you go take your sea sick meds – even if you never get sick. The are bags in every conceivable area on board the ship in case people get caught away from their cabins. Interesting touch….. The food is excellent and the staff are top notch. We have been attending a number of lectures on birds and animals found in the area. The sun is rising at about 3:50 am and sets about 10:30 pm -so lots of daylight to watch the dozens of sea birds following the ship.

The ships historian also gave an excellent talk on the early history of European discovery of the Antarctic which occurred in 1820. . My respect for the first European explorers who went through this passage has increased substantially – the pounding the boats and the men took must have been dreadful. … Drake Passage was named after Sir Francis Drake who was the first man to circumnavigate the globe going in one direction. 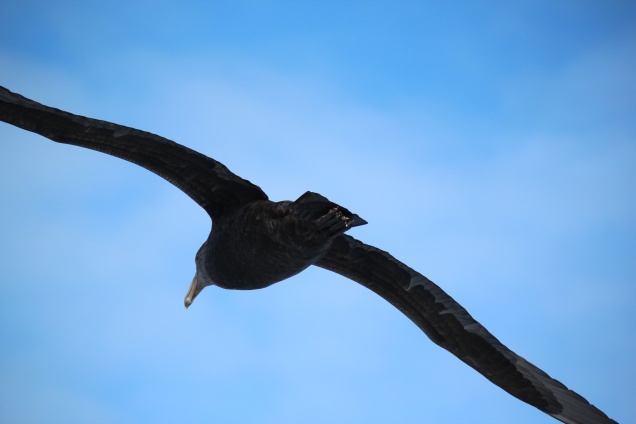 After the lectures we did the bio-security check of our outdoor clothing and shoes. This is compulsory to go ashore in the Antarctic to ensure that no foreign plants or animals are introduced to the environment. We have one more day at sea and then we will be in the South Shetland islands. We are looking forward to getting out of these seas.

OK – day 2 at sea. Still seeing the zombie waddle but we are getting our sea legs. Seems that every 20 waves or so a particularly big one comes along. You get in the rhythm of it after a while. We had to “drake proof” our cabin as the rolling sends glasses, phones, tablets, anything not in a drawer or nailed down sliding across the cabin floor.