I am not sure how to approach this blog post – so will just put my shoulder into it and get it down the best I can. Choeung Ek is one of the many Khmer Rouge killing fields in operation from 1975 to the end of 1979. Many others  are found across Cambodia. Our route to Choeung Ek included a stop at the infamous S-21 prison and torture centre that housed over 20,000 prisoners from 1975 until 1979 when the Khmer Rouge was driven from power. Our local guide lost two younger siblings and many other family members in the genocide. The best I can do in describing S-21 is to direct you to Internet sources for photos and more information. What you will see and read is not exaggerated.

Choeung Ek itself was an orchard that proved the final resting place for 9,000 people executed by the Khmer Rouge. Mass graves are everywhere. Although most have been excavated, remnants of human bone are plentiful even though most of the remains have been removed from the graves. Babies, women, children and men were executed at Choeung Ek. The wooden shed, which housed hundreds of skulls and which was featured in the infamous photos which made the world aware of the extent of what had happened, has been replaced by a Buddhist Stupa. The Stupa houses 5,000 skulls as well as other bones. 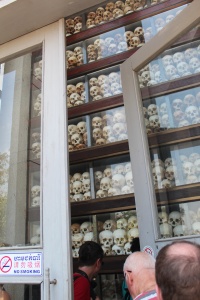 I have visited Belsen in Germany and the genocide memorial in Rwanda. Both were powerful reminders of mans inhumanity to man. S-21 and Choeung Ek were like a punch in the gut.