We plan to make our first landing on Smeerenberg on the extreme north west coast of Spitzbergen this afternoon. The area was a major whale processing plant of years ago, the remains of the blubber boiling areas are still there and at its peak 200 people made there home in this desolate place. The ship will send a scouting party ashore just after lunchtime to check that the beach is safe. If polar bears are near or on the beach, the landing will change to a zodiac cruise. Fog would possibly prevent a landing if it is too thick and hinders visibility for the scouting party.

Grey, white and blue – the colours of the Arctic. All were apparent this afternoon which turned out to be too foggy for landing because of the polar bear danger. The snow squalls come through at 30 min intervals bringing fog and mist with them. Apparently the bears can cover a mile in about 8 minutes. The rule for visibility is 2 miles or no landing. All the guides carry rifles for the protection of the people they are guiding, but with such a large group it is next to impossible for them to keep track of us all and the bears would be too close before they were sighted for an orderly evacuation back to the ship if they moved in during a squall. We opted instead for a zodiac cruise after a family of walruses were spotted in a neighbouring beach. Photos were hard to get due to the constant movement of the boat and the blowing snow. At one point a big male walrus surfaced in front of the zodiacs, pulling himself nearly 4 feet out of the water into the driving snow as he blew defiance at us. We all sat mesmerized watching him. I didn’t even think to pull out my camera. A moment that will stay with me forever.

The Arctic is unforgiving and is littered with the detritus of the mistakes and miscalculations of the past. The remains of the air hanger that was home to the airship of the ill fated Wellman expedition attempt to cross the North Pole was in a bay we passed. Another spot on White Island is marked with a cross where Swedish explorer Saloman Andree and his expedition members perished after their airship crashed out on the ice in the late 1890’s. Their bodies were found 30 years later. The consensus now is that some were killed by polar bears and one took his own life. He was found sitting up against a rock with a rifle beside him – in a pretty good state of preservation state when you think of how long he had been sitting there.

A visit to the northern most harbour seal group in the world rounded out the trip and we climbed back on board into the Expedition vessels mud room where we disinfected our boots, signed in and got changed into warm dry clothes. We are fortunate to have Paul Teolis as the expedition photographer and he has made himself available to help anyone on board during the voyage. He gave his first lecture this afternoon on composition and shooting in snow conditions which was excellent. I am looking forward to his next lecture which will be more technical in nature. During his presentation the ship raised anchor and began its journey north with plans to cross 80 degrees in latitude and explore the pack isle north of Spitzbergen. The captain hopes to spend a few days in that area, weather conditions permitting. One of the animals we may be fortunate to spot is the Blue Whale.

We did it! Not the blue whale but crossed 80 degrees north 😀at just before 11pm local time.

I will leave you with an Arctic sunset. 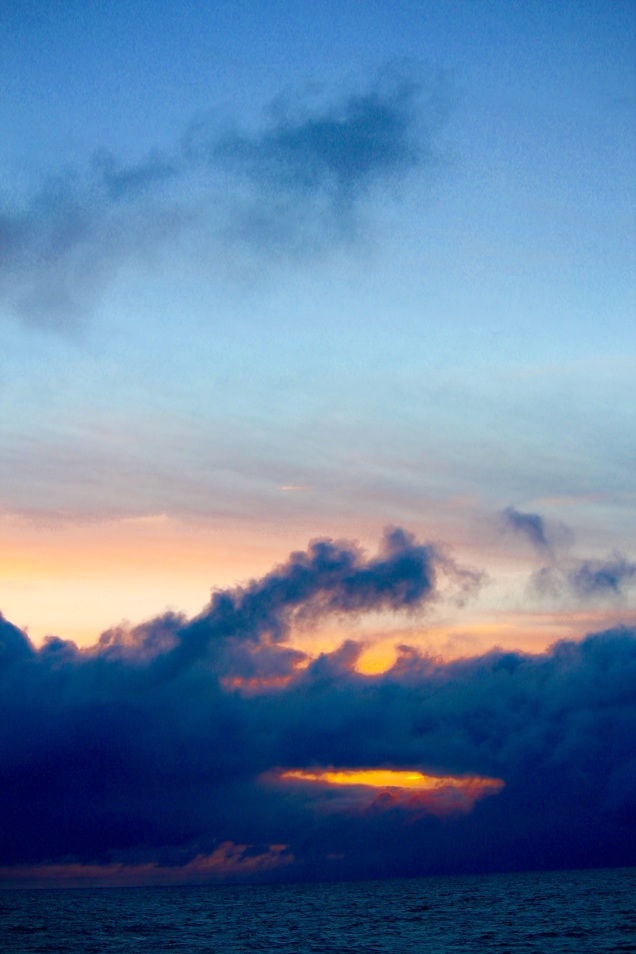 The absence of engine noise woke me around 2:30 am as we anchored in a small bay at the extreme north western end of Svalbard off Phippsoya. the sky was brilliant with the dawn so I went out on deck to take some photos. The entire ship was deserted except for a few of the crew on watch. What a glorious sky !

Our morning landing was a short one. No sooner had our zodiac landed on the beach when the polar bear alert was sounded by one of our rifle welding minders. Turned out there were three bears within a couple of miles of us. Back into the zodiac we got and had a cruise around the bay instead We watched the Bears meander around – they were several miles away – and then headed along the coastline. . It turned out to be a VERY good turn of events. As we turned from photographing three large walrus on the beach, our zodiac was surrounded by swimming walrus. They were so close we could have touched them😀😀😀 what am amazing experience going eyeball to eyeball with them!!! Got a photo this time!

The day only got better. A two hour run north and east took us to a sheltered bay off Virgohamner – northern side of Danskoya where we dropped anchor and took the zodiacs into a a large walrus colony composed of 60-80 males. What a sight – and smell 🙂 Two-ton bodies all in pile, burping, passing gas (who knew they have such bad digestive systems ), occasionally quarrelling over space and just generally being walruses.

All this plus brilliant sunshine, calm seas and drop dead gorgeous scenery. I will let the photos tell the story.

We are now above 80 degrees north. The first pack ice was encountered around 2 am and it is steadily becoming thicker.

We are seeing mainly first year ice here. Ice that formed last summer and has grown for a year. The second and third year pack ice is larger and by the third year pressure ridges have developed which the ship needs to avoid. Flocks of birds follow the ship, mainly gulls, kittiwakes and Fulmers. The ship does not throw any garbage overboard. Apparently why they are here is they are feeding on small fish (polar cod juveniles) that live under the first year ice feeding on algae and plankton. When the ship disturbs a piece of ice the cod scatter out from the area and then the birds have breakfast. So I guess in a sense we are a moving buffet. The skies are amazing today!!!

A few bearded seals and then – just as we passed 81 degrees north – the announcement of a whale spout to our south !!!

YES !!!! a blue whale – the largest mammal on earth. An animal I never thought I would see. A younger animal – around 60 feet long – completely unconcerned with us, going about his business! What at a privilege !!! He surfaced a number of times right by the boat (spraying us with whale breath 😀) – it seemed he was examining us just as we were examining him as he went about feeding. He was followed by groups of birds – kittywakes and gulls – all feeding on the krill and other small creatures brought to the surface by the whale. Blue whales are baleen whales. They generally surface three times or so in succession before diving. When they surface the final time before diving they show their tiny (relative to body size) dorsal fin.

The day closed with an excellent traditional Norwegian buffet and an Argentinian Malbec – hard combination to beat .

After another overnight voyage to the northern most part of Svalbard, we woke up to the unbelievable scenery of Woodfjord and Liefderfjorden plus Monacobergen glacier. The Captain pulled right in close to the bay and we enjoyed the incredible vista from the dining room during breakfast.

The zodiac run today was all about glaciers. We were surrounded by small pieces of ice up to medium sized berg. Apparently pieces of ice 1-5 m in height are called “bergy bits” – who knew. Highlights including watching and hearing the glacier calve off pieces of ice. A crack and then deep roar of the ice falling and hitting the water, pushing out a swell into the bay. Flocks of kittywakes and gulls cruised the edge of the glacier, swooping down to grab small fish that swarmed to the surface after a calving event. The small pieces of ice around us were full of air bubbles, which burst as the small ice pieces melted creating a popping, hissing sound as the background. Our naturalist scooped up pieces of ice for tonight’s cocktails 🙂

After lunch we landed at a bay about 7 miles south of Monacobergen – known by the colourful name of Texas Bar – apparently the name derives from a small trappers cabin in the bay. There were a number of walks scheduled for this afternoon. Botany, geology, birds, beach and photography. We are going on a photographic walk with the ships professional photographer scheduled for this afternoon. 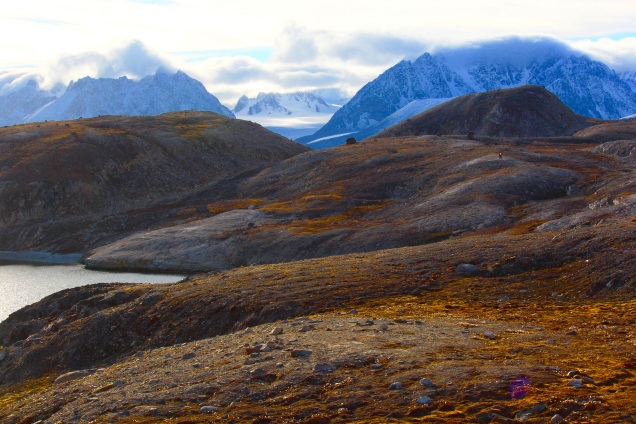 Wonderful, wonderful afternoon. Beautiful scenery, gorgeous weather – photography really coming along 😀 also got an introduction to the plants of the Arctic. The worlds smallest willow lives here. It is 4 inches high. There is a saying that if you get lost in an Arctic forest all you have to do is stand up……. Interspersed with the tiny vegetation are all ages of rocks – from the very old (granites and what looked like marble) to newer. (Shale and limestones). The glaciers that once covered this area left a tremendous amount of rock debris scooped up and carried here from other places.

This was our last day at Svalbard, the captain has started back down the fjords and we are headed for Greenland. We will be two days in transit in what sounds like reasonably rough seas. The hurricane season is in full swing in the south and the swells make it up north – reduced but still significant