Following an uneventful crossing into Belize we drove the short distance from the border to San Ignacio – a sleepy little town bearing the marks of past British colonialism. Our hotel is right in the main district of shops and restaurants. The late afternoon was spent at the pool as we had a rest and worked out the next day’s activities.

Hard rain woke me up but by 8 am the clouds were breaking up. The hotel has character 😏 A lovely veranda around the front and back of the hotel provides nice places to sit and view the goings on in the town. A few of us sat out late last night having a glass of wine and enjoying the panorama of the towns activities below us.

Belize is a rich country compared to Guatemala, 330,000 plus people in live here and the language is English.

After a good sleep, a quick visit to a local supermarket and breakfast was followed by a hike up hill out of town to the ruins of Cahal Pech a citadel Mayan fortress high in the hills above San Ignacio. Archeological evidence shows human presence here for the past 10,000 years. Initially in the form of hunter gatherers and culminating with the Mayans. By 300BC -300 AD the city had grown to become one of the primary Mayan centres in Belize. Major construction had ceased by the 9th century and by then it was in decline. The city was never sacked in war – theories are that environmental degradation and the accompanying societal breakdown caused the downfall of Cahal Pech. Just before its downfall it is estimated that up to 20,000 people lived in and around the site.

We had a fascinating few hours roaming the site and picturing how the
Mayans had lived there and utilized the area. The site was almost deserted which added to the unique charm of the day.

History is cyclical. Walking through the remains of the Mayan civilization at the sites we visited has highlighted the path that these cycles take. Jared Diamonds excellent book “Collapse” outlines the fates of a number of societies around the world and discusses why some societies succeed and others fail. Commonalities among societies that fail include environmental degradation, over population, climate change (drought), war and disease. A sharp division between the elite and so called worker classes is generally present as well.

Disquieting parallels exist today and echo throughout history. During our walk through Cahal Pech our small group discussed the refugee crisis in the world as millions of people displaced by drought and environmental catastrophe move northward looking for a life. I deliberately do not say a better life, just life. A mother fleeing her country with her children would not do so unless motivated by pure survival. The accompanying societal disruption and the results we are seeing in the political arena are ominous portents of the future.

A walk around town – some interesting street art – and a late excellent Indian lunch rounded out the day. 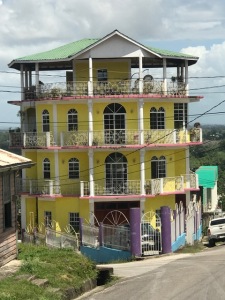 Travelling to our next destination Caye Caulker – a hedonistic playground – will be a sharp contrast to the areas we have traveled through so far. Our mode of transportation will be the so called “chicken bus” to Belize City and then by boat.  It will be a busy couple of days. I have a flight booked over the reef and famous blue hole the afternoon we arrive. The day after will be a whole day snorkelling and sailing along the reef.

From the third world to the first world in a heartbeat….