Woke to a beautiful morning and view from my room 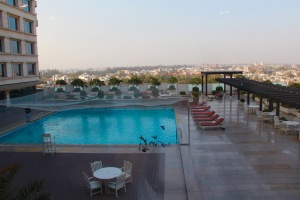 – fabulous Indian breakfast in the hotel and then we were off.

The scope of Delhi is easiest to describe in terms of population. 25 million people live here – the population of Canada is around 35 million – it is an interesting visual that most Canadians could fit into the sprawl of this place. Delhi is truly a melting pot of India. Immigrants over the centuries have contributed to the culture and cuisine, as well as leaving their buildings behind. Three UNESCO world heritage sites (gorgeous examples of Indo-Islamic architecture) are located in Delhi – the Red Fort, Qutab Minar and Humayuns Tomb. Some sort of civilization has been here since before the 6th century. Wars and familial strife over the centuries have resulted in Dehli being sacked multiple times and cities built over cities – at least 8 major cities have left their footprint here. The seventh city built by Shah Jahan (of the Taj Mahal fame) is now referred to as Old Delhi. New Delhi was the name given to the city which became the capital of the British held territories in India.

The first stop today was the Red Fort, a huge walled fort and palaces built in the reign of our old friend the builder Shah Jahan. 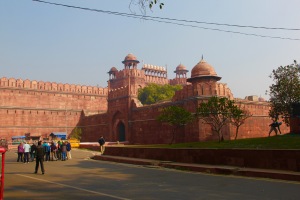 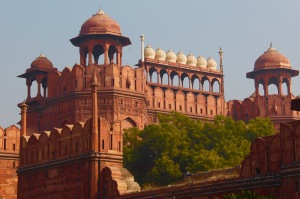 The second was the Mosque Jama Masjid – apparently the second largest mosque in the world after Mecca. And yes our friend SJ was also responsible for building it. He was a busy guy! Both buildings were built using the characteristic red sandstone and white marble so beloved by the Shah, sourced from Northern India and brought to Delhi by huge elephant caravans from the Northern quarries. 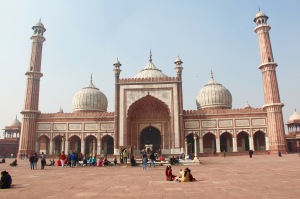 The actual prayer yard for this Mosque can accommodate 25,000 people. During services exquisite carpets are put out over the red sandstone. 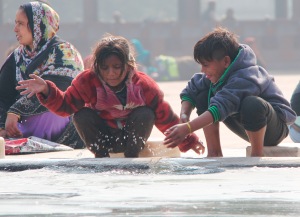 To go in you have to remove your shoes and if you are female put on a very large over coat that essentially covers you from neck to toes – and no I did not get a selfie….. The British actually considered dynamiting the Mosque following the revolt of 1857 – thankfully cooler heads prevailed.

Old Delhi is a warren of narrow streets, shops, apartments and humanity. And have I mentioned the traffic?? 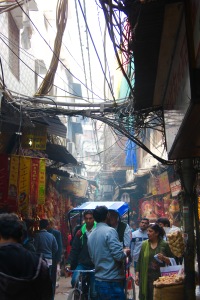 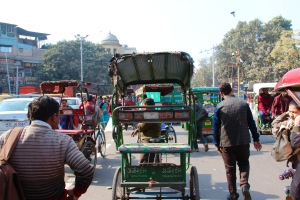 Wall to wall vehicles of every description, all blowing horns incessantly and missing each other by inches (although in some cases not :-(((. ) Passing in lanes no more than 4 feet wide in some areas- My guide Pushprenda K. navigated it all seamlessly. I cannot say enough about his knowledge (MSc in Indian history) and professionalism during our day together – and recommend Pushprenda and his company http://www.toursbylocals.com unreservedly to anyone travelling to Delhi. Our route took us through the 300 year old Chandi Chowk market with its various sections devoted to jewelry, spices, wedding apparel, and just about anything else you can think of. 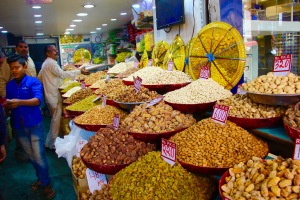 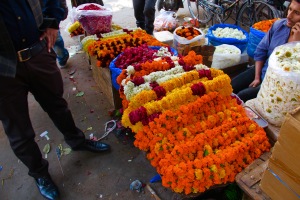 A seldom used back stair route took us up to the roof tops above the spice and flower market. 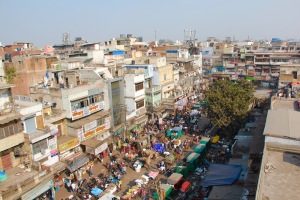 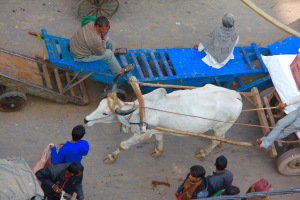 The pollution has been burnt off somewhat by a hot air sink above the city so the views were reasonable. It was laundry day and drying clothes were everywhere. Most water is pumped to cisterns on top of apartment buildings and then gravity fed to the households. 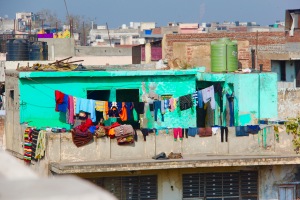 Marsala tea and an incredible street food lunch of parathas ( a flat bread made of wheat flour combined with peas, cauliflower and other vegetables mixed in with the dough – a mashed potato curry and dal accompanied the parathas – Lassi a sweetened yogurt drink was the icing on the cake.) 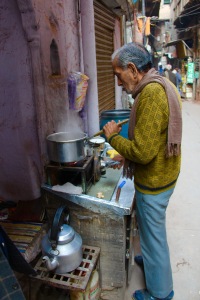 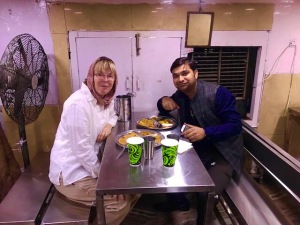 and rickshaw rides completed a memorable day. One tip if you go ladies, put a scarf over your head. I figured that out after the first 10 minutes – it makes the day go much easier if you aren’t getting stared at or bumped into on purpose. With a head scarf, sunglasses and loose clothing you are invisible and can explore at will.

This is an incredible country. I am amazed at the way it has grabbed me……. Tomorrow is a photography tour in the early am – stay tuned