Our last day in Delhi took a different turn. After departing  into a cold foggy morning the first stop was the Salaam Baalak Trust an NGO which helps more than 9000 street children a year in Delhi and surrounding areas.  This childrens charity takes children off the street in Delhi – rescuing them from abuse, prostitution and worse – giving them an education and a chance for a better life. Asif, the lovely young man who gave us our tour of the facility and   the surrounding areas today was an orphan at 8, on the street picking rags. 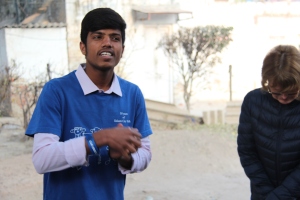 He is now 18 finishing high school and planning on majoring in political science in college. An amazing success story! Luminaries including Michelle Obama and the Duke and Duchess of Windsor have visited the charity and their photos grace the office walls – a very inspiring visit!

Some interesting things about the Hindu religion emerged today during our walk, brought about by group member comments on the huge rat population in the area. The Hindu religion regards many animals as sacred including rats, dogs and cows. I have never seen fatter rats!

The street dogs I have seen are for the most part in very good shape, as are draft animals such as bullocks and cows. Cows wander with impunity across and along busy city streets. An interesting moment occurred yesterday when a cow showed her disdain for the vehicles waiting for her to cross the road by depositing a big pile of manure directly in front of a couple of motor bikes at the front of the que. The resulting conundrum for the riders was interesting to watch as room to maneuver sideways is highly restricted on Delhi roads.

Our next stop was the main Sikh temple in Delhi. Once shoes and socks were removed we wandered down the sidewalk and with head scarves in place we spent a fascinating hour in the temple watching the worshippers and learning about the Sikh religion.

Less than 2% of the population in India is Sikh – yet they have a large impact on the communities where their temples are located due in part to their preparation of regular meals for anyone who is hungry.  Our group was able to tour the temple kitchens to watch some of the preparations. A very noisy parade greeted us upon our exit from the temple. According our guide there are 366 parades for every year  in Delhi 🙂 One was plenty for me 🙂 An out of tune tuba being blown as loudly as possible is not a thing of beauty  (lol)

Special mention —– Our main meal of the day was paneer tikka marsala (solid cottage cheese and marsala sauce) and roti bread. I could easily become a vegetarían here :-).

The perfect end to a perfect day was the drive to 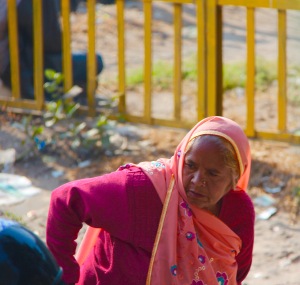 the Qutab Minar, a UNESCO world heritage site in Delhi. The morning coolness had tuned to warm sun and a soft breeze when we arrived at the site, where the late afternoon sun was turning the sandstone structures golden. The Minar was began in 1192 and finished 20 years later in 1220. 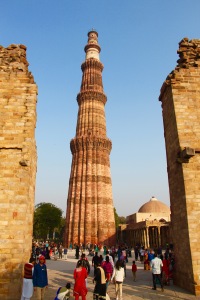 Services are no longer held here due to the heritage site designation and entrance to the Minar tower is no longer allowed due to fatalities  in the 1970’S. The Minar (tower) is surrounded by buildings including the Quwwat-URL-Islam Mosque and the very old Iron Pillar of Delhi. The IPD stands 7 meters tall and is a victory column originally  erected and dedicated to the Hindu Diety Vishnu in the 3-4 th century. 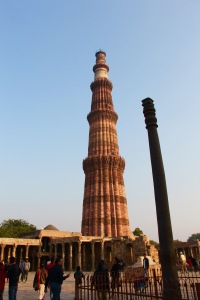 It is said to be of the purest iron ever produced by humans and has withstood cannon balls and other implements with impunity. 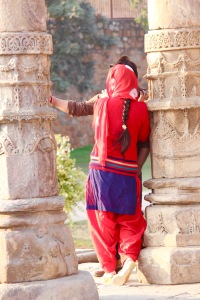 It was late in the afternoon when we arrived at the Minar and warm so for the first time in Delhi since day 1 I removed my head scarf – and then something truly extraordinary happened. As I wandered through the ruins taking photos I came upon small family groups taking photos – I offered to take a photo for them and then they asked me to be in the photo. From  then on whenever I sat down to soak in the site, Indians came up to me and asked to have their photo taken with me. All asked me where I was from and if I liked India. Canada and my affirmative response produced wonderful smiles – it is amazing how much a smile can unite people. A truly special afternoon.

This has been an amazing few days, however I will be glad to leave the traffic  and pollution behind. Our last drive through Delhi travelled into  a smokey red pollution tinged sunset, flavoured with the smoke from the hundreds of roadside stands and cooking fires that marked our route home to the hotel. If I am ever dropped blind folded in Delhi at some point in the future – I will know exactly where I am….

We are off to Varansi tomorrow. Namaste!