An early morning departure began our 16 hour trek to Agra – and a trek it was. Our first stop was the palace of  Orcha:Jahangir Mahal and the surrounding town and buildings. The sandstone palaces are interesting as the court lived above in the airy rooms while the armoury and soldiers lived in the subterranean parts of the palace.

The palace location on an island in the Betwa River ensured exposure to breezes to help keep the complex cool. Some beautiful interior art has survived.  The entrance to the complex garlanded by holy men and their wannabes plus the usual traffic chaos enlivened by the narrow arches on some roadways.

The cenotaphs of the rulers were centred around a beautiful garden area, the entrance complete with the resident cow delegation. 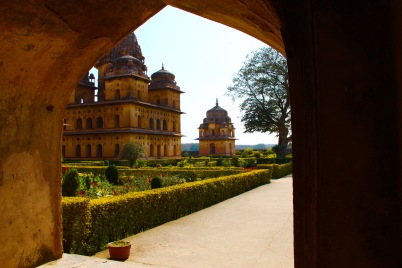 Following the palace we switched gears and visited a paper factor on the outskirts of Orcha. A very inspiring NGO which produces paper out of recycled cloth scraps, providing employment to women in need. In addition, the women are taught reading, writing, some basic mathematics and some rudimentary English. The process itslf is fascinating – in short,  cloth minced up, treated with alum to form a sludge then screened to remove the water, layered between cloth, dried, ironed and then cut. 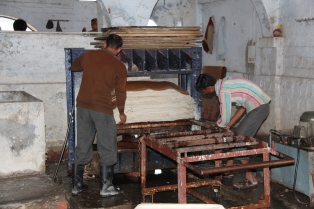 The result is beautiful heavy parchment quality paper. After a visit which ended way too soon – on the road again 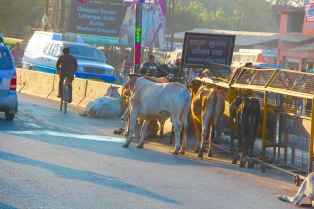 to the train station to board our train for Agra and the Taj Mahal.

My first experience in an Indian train station did not disappoint :-). Pre-arranged porters greeted us and led us into the utter chaos of the train station – it seemed like a mini version of street life – the only animal missing was a cow – and I am sure there was one some where.  During our wait on the platform (the train was delayed 2 hours) everyone from very persistent beggars to commuters approached us. One lovely young man was talking via Skype to his wife and children, he positioned the camera to include our group and pretty soon we were all waving at each other – one Canadian member of our group was handing out little Canadian flag pins which were immediately proudly put on their jacket by the recipients.

Trains are packed! And I am glad we traveled in first class. The second class carriages had people hanging out the windows and doors and stacked two three deep inside. People trying to board when others were trying to get off. The trains stop for 1-5 minutes at the stations so speed is of the essence 🙂 After an eventful evening we reached our hotel in Agra at midnight and prepared to leave at 5:45 am for the Taj Mahal.

Our specific  plan for the TM was to get a photo of all group members individually on the Princess Diana bench before anyone else was in the area. Seeing as 100,000 people often visit the site daily, this was a challenge which required some proper planning and execution. Our early departure ensured we were first at the entrance gate – the hour and 1/2 before the gates opened was passed drinking chai tea, chatting and people watching. When the gates opened we had our route planned to the Princess Diana bench and our plan to get there. Running is not allowed on the site – amazing how fast you can walk if you need to 🙂 Three gates open at the same time in different areas of the complex so the competition is fierce 😀 And…….. We did it!!!!!!! 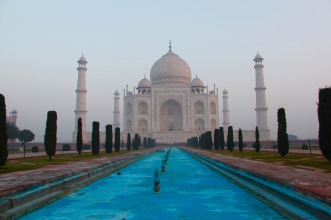 Magic is the only way to describe being on the grounds watching the wispy fog turn to gold and slowly dissipate  as the sun rose over the white monument of love the Shah Jahan built for his wife Mumtaz Mahal. 20,000 workers took 12 years to build this amazing structure which should be on everyone’s list to see. If you go, go as early as you can. By the time we left at 9:30 the site was resembling Disneyland on a bad day. More to come…..