A four hour drive from the wilderness of Ramthambore NP to Jaipur – the pink city- passed quickly as we chatted, listened to music and watched the ever changing roadside panorama. 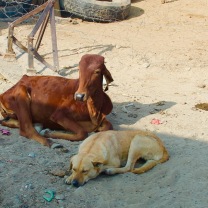 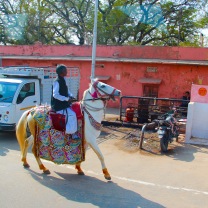 A good part of the drive was spent discussing the idea of arranged marriages in India, as well as different social perceptions of affection that men show in public towards one another. Here in India young men are often seen holding hands or with arms around each other’s shoulders. What in Western countries would be considered a romantic liason – here is looked upon as a couple of good friends expressing that friendship.

Once in Jaipur we proceeded immediately to the old Jaipur city, which is a walled enclave surrounded by the sprawl of the modern Jaipur. Modern Jaipur is a college town as we refer to it in the west. Dozens of colleges, Rajasthan university, technical institutes etc line the main Hwy  into the city. Once through the walls of the old city things change dramatically into the chaos–like nature we are familiar with from old Delhi and Varanasi. The buildings and walls of the old city are all a terra cotta pink colour – the painting done in preparation for the visit of King Edward the 7th in 1903. During that visit he famously remarked – this city is all pink – hence the name pink city. Transportation styles definitely varied along the city streets.

Our first stop was the UNESCO world heritage site the 18th century observatory Jantar Mantar. An extremely knowledgable young man took us on an exploratory tour of this amazing place which was used to calculate time and location to a few seconds accuracy  over three hundred years ago. 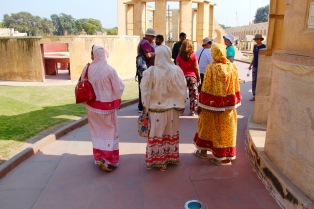 Following our time at the observatory our second stop was the Jaipur royal place complex. The Jaipur royal family still live in part of the palace. The royal quest house was where Queen Elizabeth and Prince Philip stayed in the early sixties during their visit. After a group photo, we were able to tour part of the quest house which now houses an incredible textile collection. Interior photos are not allowed, however one over zealous young man in another group took a cell phone photo. The resulting confrontation between him and the guards provided some in-tour entertainment. Am not sure exactly what happened to him – he still had not exited the house by the time we left. The guards to the main palace were quite obliging regarding having their photos taken with us – following which we had a look around the rest of the palace and it’s intriguing Islam-Indo architecture before heading for our hotel – a lovely converted heritage home in Jaipur.

Our day ended in a very special way with a bazaar walk and then a wonderful cooking class and dinner with a local family.  We learned how to cook a vegetarian and non-vegetarian dish, as well as were treated to appetizers and other excellent food. All eaten under the moon and stars in a large open air courtyard on the third floor of their home. Magic!

Tomorrow we rise before dawn for a hot air balloon ride over Jaipur.