We arrived in Udaipur, the so called white city, city of the lakes and Venice of the East, and it did not disappoint. The main palaces and other palaces converted into 5 star hotels surround Lake Pichola, a man made lake which is about 21 meters deep. Activities around the lake and on the steps of the ghats varied from personal hygiene to cocktails and coffee, making for some fascinating photo ops. Our day here began with a tour of the Main Palace, continued with some retail therapy and an excellent lunch, then continued with a lake cruise, a dance show highlighting dances unique to Rakasthan and finished with an excellent candlelit dinner by the side of the lake. Quite a day!

There are 4 palaces here of note, the City Palace (winter palace, where the royal family still lives) , the Lake Palace (summer palace for the royal family which is now a five star hotel), the Jag Mandir ( used as a summer and pleasure palace, now a hotel and restaurant) and the Monsoon palace high in the mountains.

Our morning guided walk explored the City Palace and the surrounding areas. 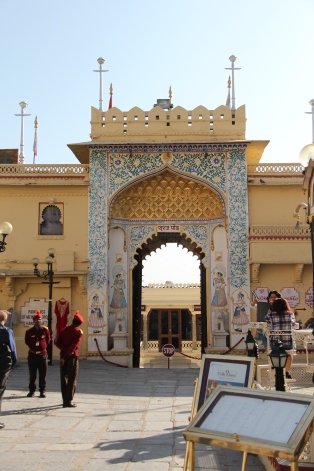 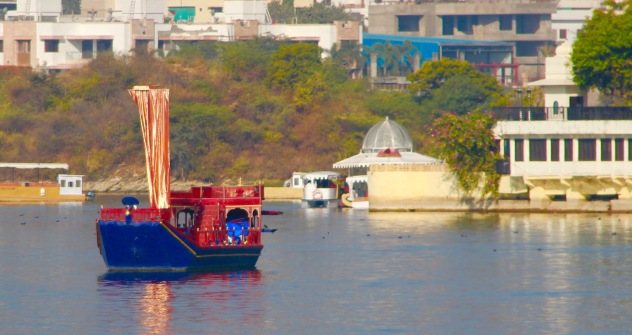 An interesting note regarding the ears of the horses here. War horses have been bred for centuries in Rajasthan and selection has been for a particular ear set, evident in the photo below. This was apparently used as a gun sight during battle when the rider would fire from the horses back at the approaching army. Who knew….. 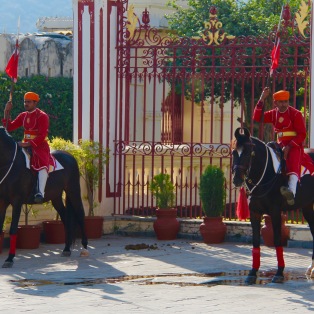 Following our time in the palace we visited an artists cooperative deep in the city. All art sold in their co-op goes to benefit the 22 families involved in it. The work is incredibly detailed, done with pigments sourced from rocks with the exception of yellow which comes from distilled and dried urine. Brushes are made with camel eyelashes and squirrel tail hairs – would be an interesting process to see how they got these….. Artists work in thirty minute shifts, take a break and then back to work – three hours of painting a day is a normal days work, as eye strain becomes a problem after that. Painting is on silk, wood, marble and paper. A beautiful silk work of art which took two months to complete by the chief artist caught my eye and is now tucked into my ever growing pile of treasures to take home.

Sunset over the lake was outstanding viewed from a slow moving flat bottomed boat which took us in a large circle around the lake. 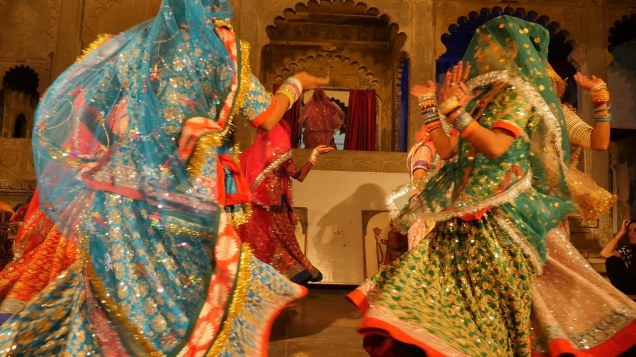 we headed over to a wonderful lake side restaurant called Tribute, the name referring to the Tribute paid to the famous horse Chetak ridden by the Maharana Pratap in a battle with the Mughals in the 16th century. Although severely wounded, the horse carried his wounded rider to safety before dying of his own wounds. Horse memorabilia was everywhere. The dining terrace along the shores of Pichola lake, candle lit with incense drifting through the air was magic. 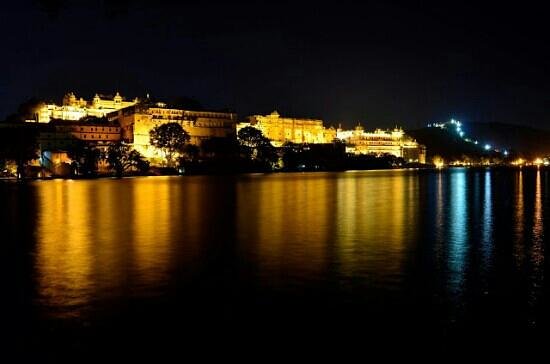 Tomorrow we fly to Delhi for the last day of our group tour and a farewell dinner. I venture into New Delhi on Sunday with a driver and a guide. Plans include visiting the Ghandi Museum, the India gate and the site of Ghandis assassination. Stay tuned….