A magical day drifting along the  main cobblestone streets of Oaxaca – exploring small alley ways leading into shopping areas, visiting the Museum next to the Santo Domingo Cathedral, taking in the art galleries in town and generally wandering. I will let the pictures tell the story. 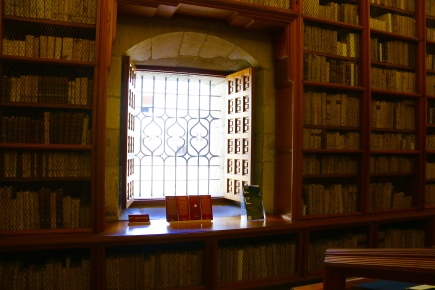 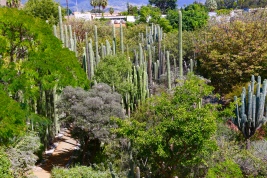 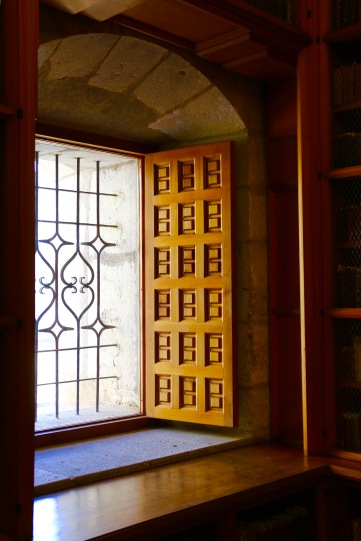 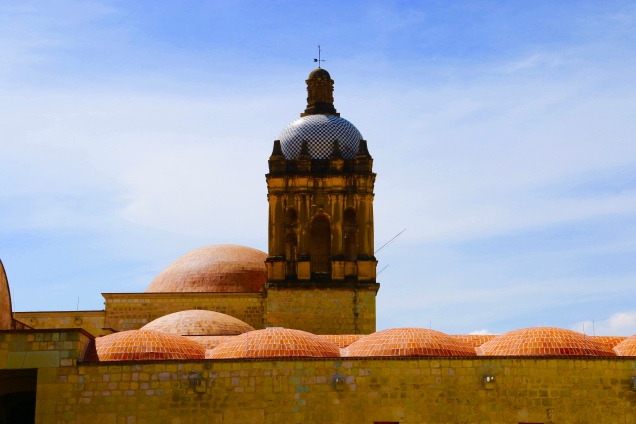 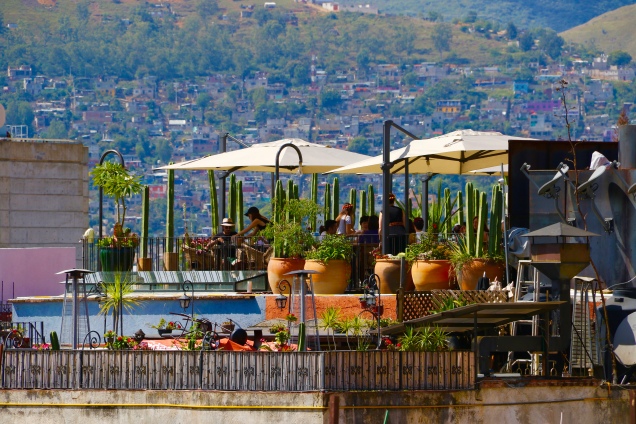 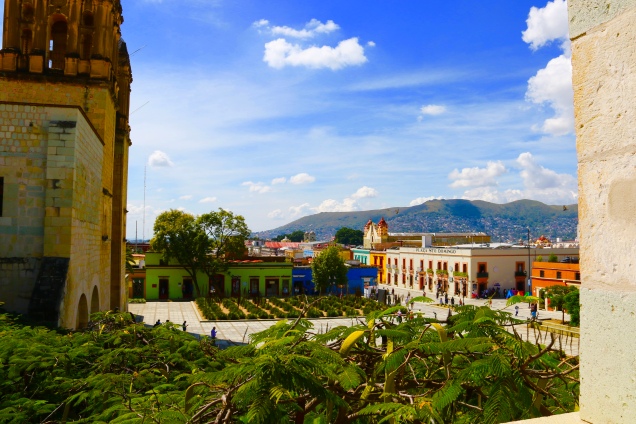 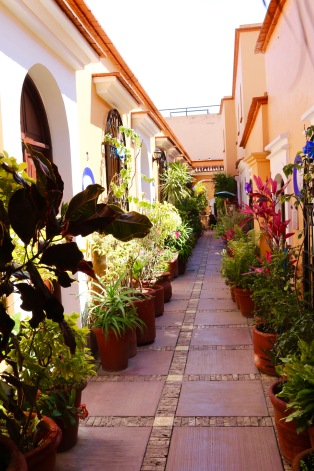 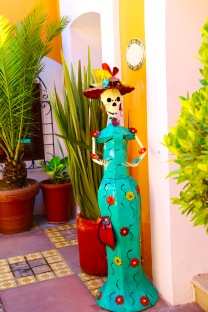 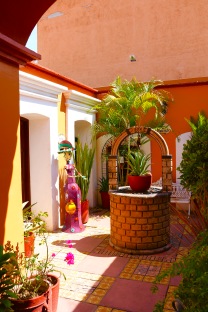 I fly home tomorrow morning into early winter  – this has been a perfect break, balm for the soul and spirit. Thank you all for following along. For those of you who have asked, I travel with G Adventures and prefer their National Geographic style tours.  I have found the CEO’s outstanding  and the people on the tours very sympatico in terms of age and interests. Until next time hasta la vista!

Today was parade day. After a late start and a wander around town to pick up some supplies we headed back to the hotel courtyard to meet up with the professional make up artists hired to help us create our look for this evening. The results were outstanding.

Oaxacas day of the dead parade bands include tubas, drums and saxophones – all blaring at top volume, combined with figures dressed in every imaginable costume – terrifying and otherwise – all jumping around on the spot – mezcal flowing freely 🙂

The band generally plays the same song over and over again, faster and faster until the parade starts to move to a different place and the crowd follows along. The process then repeats. Although some of the costumes are pretty scary, young children are everywhere, rapt in their attention and often posing with their favourite scary hero’s. We had a laugh when some tourists were taking photos of us – both groups realized what was going on, had a shot of mezcal and moved along with the evening. 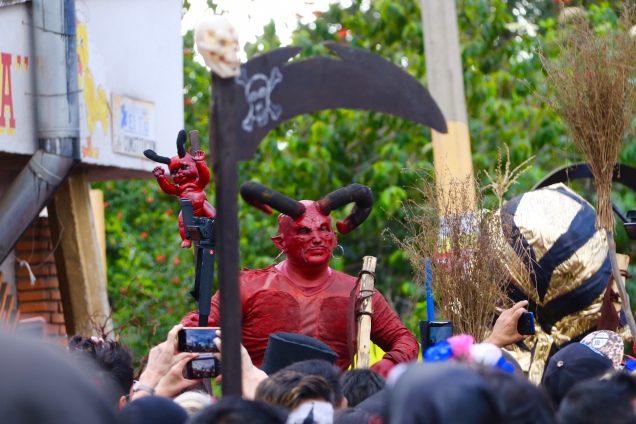 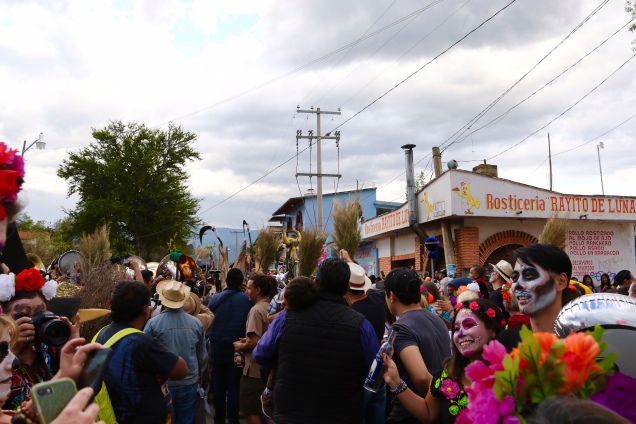 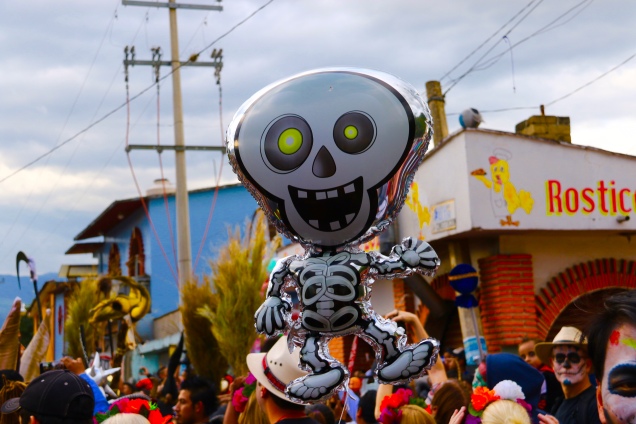 After an hour of mezcal shots and jumping around (my knees may need to be replaced 🙂 we moved along to the next stopping point. 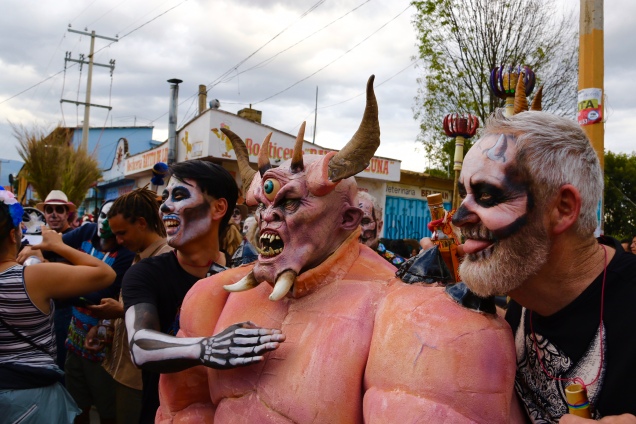 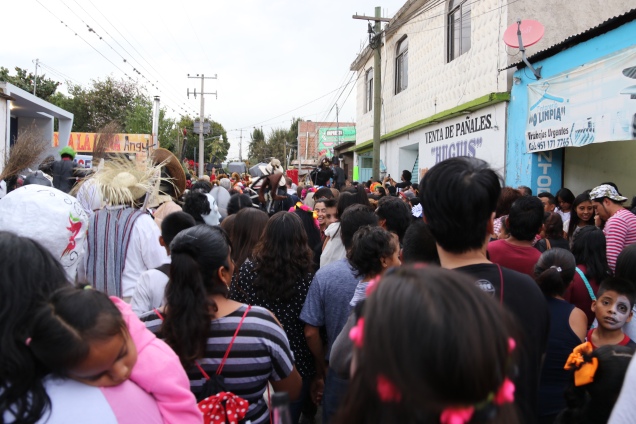 At this point even the dogs had taken to the roofs. Smart puppies!

About 2 hours into the evening the rains threatened and as many of us who could crammed into an outdoor covered porch just as the downpour started. Then something truly extraordinary happened. Parents dancing with children, rural couples dancing together, young courting couples dancing, crazy tourists jumping up and down with tubas blasting in their ears. Outside in the rain, parade participants were dancing like whirling dervishes. Absolutely magic.

Our trip back to the ground transport involved wading small lakes which had appeared since our arrival. Tomorrow is my last day here – i look forward to exploring some city landmarks and art galleries in this magic place. Stay tuned.

Hierve el Agua has been on my list of must sees for a while. In a nutshell it is several petrified waterfalls, the largest rising up to 90 meters about the valley floor. Small amounts of water saturated with Calcium carbonate (limestone) and other minerals seep out through the cliffs and over the cliff tops. Evaporating water leaves behind mineral deposits hence  “petrified waterfall” formation – similar to stalactites found in some caves.

The mineral laden water seepage occuring at the top of the waterfall creates small warm pools said to have healing properties as well as some infinity pools. Psoriasis, excema and other skin issues are said to benefit from the water which has a silky feel to it. Anywhere wet is generally safe to step due to the lack of algae which cannot surviving in the alkaline moisture.

The Zapotec built an extensive system of irrigation canals into the mountain to service their terraced fields in the area. The canals are of a unique design in the Mesoamerica world. The elevation of the area makes for outstanding views of the surrounding valley on a drop dead (sorry couldn’t resist) beautiful day. Our scramble down the steps to the base of one of the waterfalls landed us in a magical place showered by water drops pushed by the wind from the waterfall behind us.

If you go wear good walking shoes. It is a scramble to the bottom of the waterfall but worth every step. Be wary if plants alongside the trail. Many are irritants to skin. Interesting that a potential problem has the solution steps away. 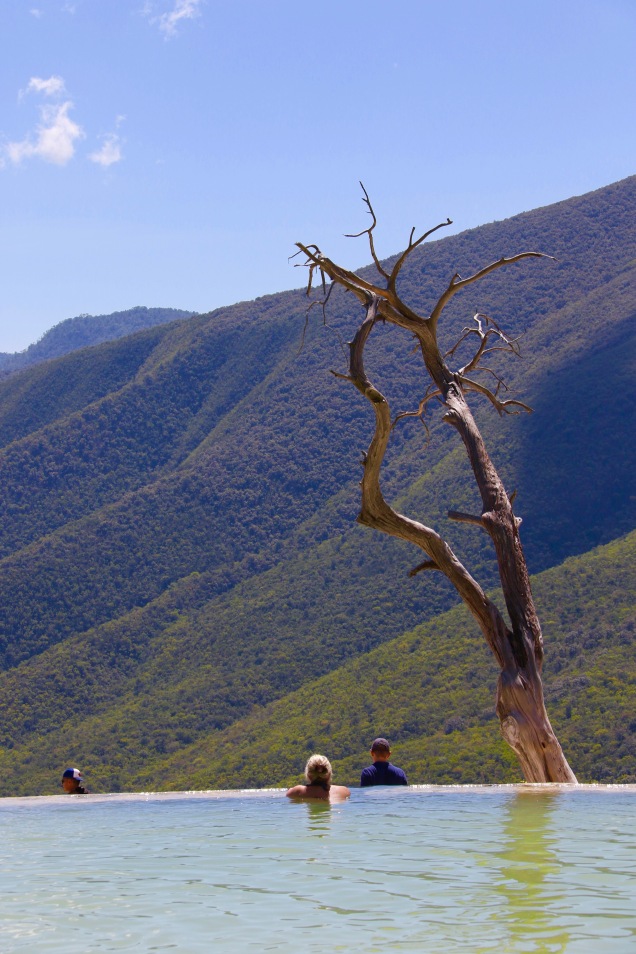 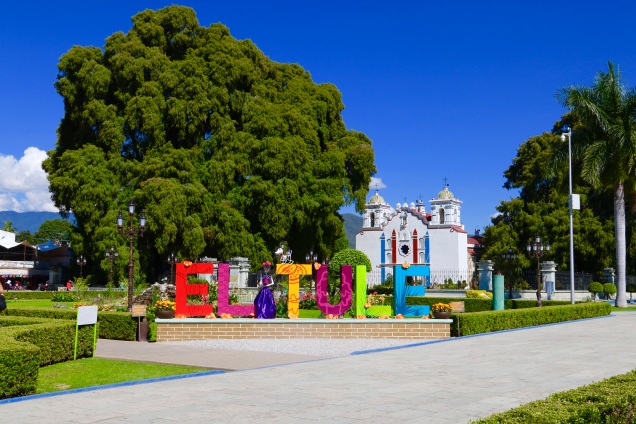 El Arbol del Tule (The Tree of Tule) is reported to be the largest tree in the world with a trunk circumference of 42 m and an age estimated to be around 1600 years. An amazing tree to stand under and feel the life force emanating above you. The town or Tule is charming (and has excellent ice cream) and the cathedral makes a photogenic foil to the magnificent tree which

has has been nicknamed the tree of life due to reported sightings of animal and human shapes in the bark – whether quantities of mezcal were required to facilitate these sightings is unknown 🙂 Can you see the old man in the tree?

This evening we spend our time in the local cemeteries where the Day of the Dead celebrations will be in full swing. Hope to get some photos of the party.

The Day of the Dead

The beginnings of the day of the dead festival can be found in pre-Colombian cultures. Originally celebrated in the summer the dates have gradually changed to merge with the dates of the western worlds Halloween or All souls eve. There are really two parts to the ceremony – the first being to honour children, the second to honour adults.  Marigolds and offerings of food including bread of the dead (oblong or round loaves with a skeleton fashioned in dough on the top) are left at alters as offerings for the dead. The strong scent and bright colour of marigolds are thought to help the souls of the dead locate their loved ones. Altars also contain photos of departed loved ones, offerings of their other favourite foods and other memorabilia such as toys for children. Cemeteries are cleaned and decorated leading up the festival which culminates on Oct 31- Nov 2 with graveside vigils, parades and tributes. An absolutely wonderful movie to watch to capture the essence of this is the film CoCo.

We started the evening off with a visit to a very old smaller cemetery. The history of cemeteries and the inadvertent origin of the post colonization Day of the Dead celebration began with the decimation of indigenous Mexican people by the diseases carried by invaders. Because of the virulence of the diseases, cemeteries were located far away from population centres. The resulting need for food, water, lodging, flowers etc by pilgrims coming to visit their dead, led to the development of markets near cemeteries. This was unique to Mexico, together with the fusion of incense and candles from the Catholic faith. A few carved pumpkins symbolic of modern day Halloween also made an appearance here and there.

On our way to the cemetery we discussed how the increased movement of people during the last 50 years has resulted in a dying Day of the Dead festival, as well as a disconnect for many other cultures from the final resting places of their ancestors. Many graves here are now of the “forgotten ones” as family has moved from the area or the younger members of the family have lost track of generations older than their grandparents. 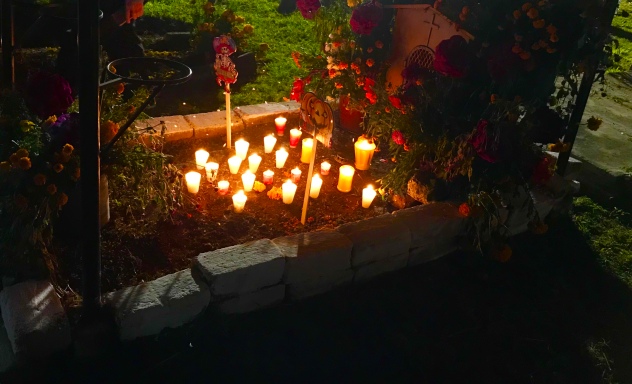 Each of us took a candle and flowers to place on the grave of a forgotten one. One grave was of a child who lived one day, another of a Señora who lived a long life. In both cases life had taken a twist in a way that resulted in the two souls being forgotten. 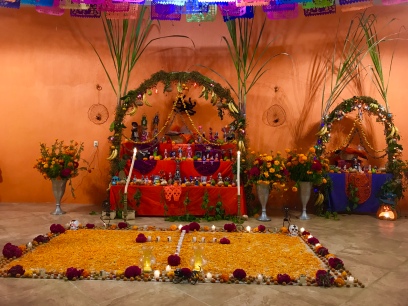 The second cemetery was huge with a police presence. The several acres of candles, music, incense and flowers was an assault on the senses. Some grave sites were open to photographers, some definitely not. I am glad I left my huge flash behind and just used the cell phone. Something about a flash is definitely an intrusion on privacy. 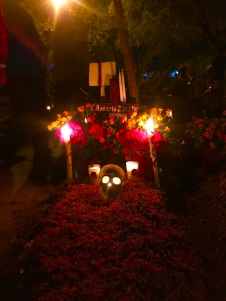 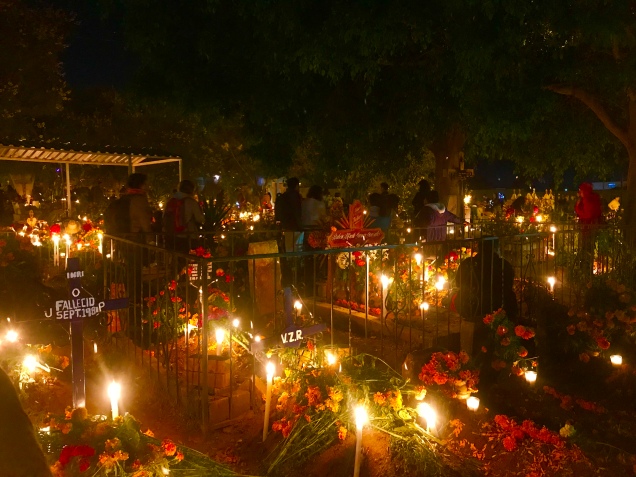 All in all a thought provoking night that will take time to process. Until tomorrow – Buenas Noches