Traditional Borneo dugouts took us swiftly down river from the lodge this morning towards another major set of caves – the Cave of the Wind and the Clearwater cave. The breeze on the river as we travelled was exhilarating and cloud cover added to the relative coolness of the day.

A Penan village was our first stop before reaching the cave sites. The Penan are one of the last remaining indigenous tribes in Sarawak that practise a hunting and gathering lifestyle. Approximately 16,000 remain.

Trying to be helpful the Govt built them longhouses of concrete which the tribe quickly used for storage – they live elsewhere 🙂 The women create beautiful plant fibre weavings using traditional methods and dyes. Following a brief tour of the village we visited a small handicraft market in the village where some baskets spoke to me and joined my camera in the dry sac. Hopefully they won’t set off alarms going through Canadian customs….. 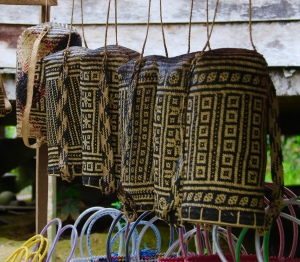 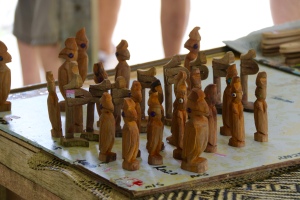 An elderly gentleman dressed in traditional Penan clothing joined us outside the market – according to village lore he is in his late 90’s and doing amazingly well.

The Penan are blow dart hunters and demonstrated the skill for us, after which some members of the group tried their hand at this ancient form of hunting. Darts went everywhere in the beginning- but some folks got the hang of it pretty quickly.

The caves were amazing. I hope the photo gives some idea of their grandeur. 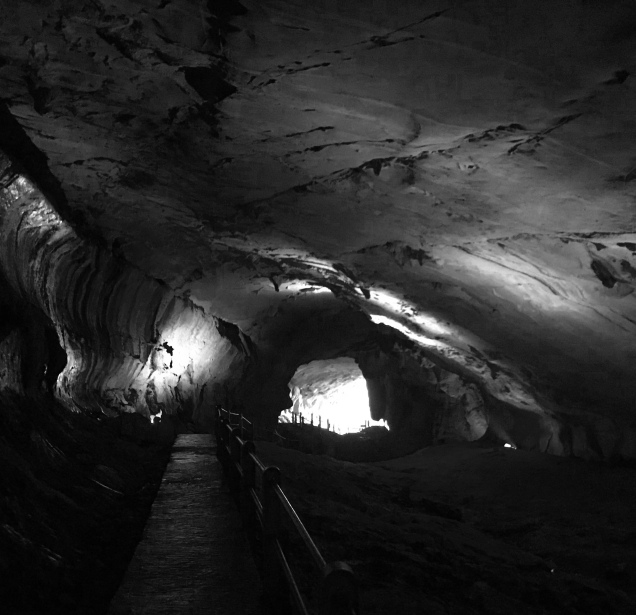 The Cave of the Winds was used for a dwelling by ancient peoples of Borneo, artifacts and bones have been found at the site. We saw no mammals but some impressive insects and beetles. One caterpillar fell on the exposed arm of a group member and delivered a toxic jolt (always wear long sleeves if you journey into the jungle here), another group were in a feeding mass on a nearby tree and an extremely impressive horned beetle made an appearance later in the day. 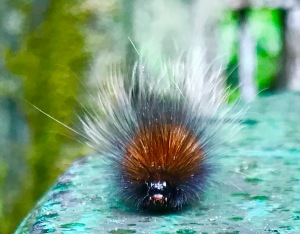 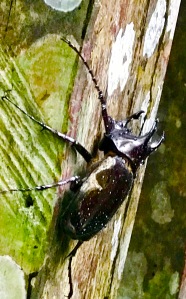 A traditional Sarawak lunch of coconut curried chicken, vegetables and rice served on a tin roofed platform looking out over the river rounded out the morning. The lovely food, washed down with hot tea to the accompaniment of the rain on the roof was magic. The dugouts then took us back up stream to the lodge, dodging raindrops.

Tonight we go for a jungle walk. There are bioluminescent fungi here, as well as a million frogs (based on the noise last night) and hopefully some nocturnal mammals. In the meantime some of us had a dip in the pool and watched the rain come down accompanied by growling thunder in the distance.

One thing became apparent today and tonight – it rains in the rain forest 🙂. Our ramble along the jungle paths after dark turned up bats, geckos, huntsmen spiders the size of salad plates, crickets, stick insects, some bizarre worms and the ever present caterpillars. What is conspicuously missing and has been missing so far in this trip are any mammals or birds. The combination of heavy logging for slash and burn agriculture, plus palm oil plantation clearing together with hunting pressure has driven most mammals and bird species deep into remaining forests or eradicated them all together. The result is one of the oddest jungles I have ever been in. Full of insects and their predators – bats, frogs, toads and snakes – and little else. One aha moment tonight was the spotting and recording of the Appy Dwarf Toad – a species endemic to Borneo and not often seen. It was also stick insect central tonight with sightings of very young ones to gravid adult females resembling something out of the Aliens film franchise. 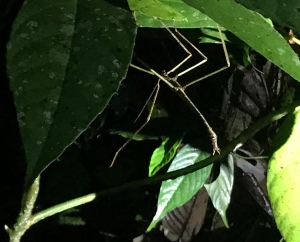 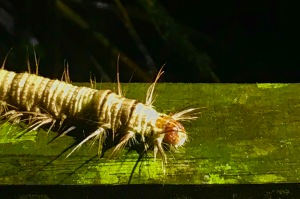 This is our last night here. We fly to Kota Kinabalu tomorrow for a night before heading out to the wildlife rehabilitation centres and the national parks in the northern part of the island. As some of our clothes are walking around on their own at this point we hope to find a laundry at our next stop 🙂  Until then memburu yang baik!